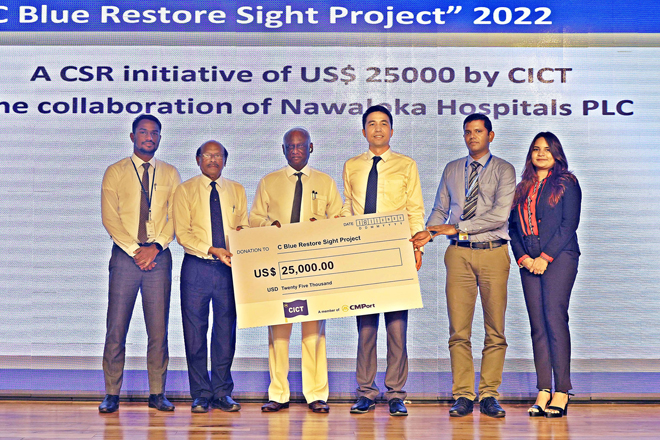 Another group of Sri Lankans with correctable eye diseases and disorders will soon begin surgery to restore clearer vision, thanks to the latest phase of a community initiative of Colombo International Container Terminals (CICT) in partnership with the Nawaloka Hospital.

CICT recently donated US$ 25,000 (Rs 9.25
million at current exchange rates) it has pledged for the project. The donation
is part of CICT’s ‘C-Blue Restore Sight Project’ that the
Company launched in 2015.

Nawaloka Hospital will procure, supply and utilise
all the resources needed to implement the project, including providing professional
medical staff, lenses, accessories, and other equipment to perform surgeries,
under a Memorandum of Understanding (MoU) signed by the two organisations. The
patients for these free surgeries will be selected from the waiting lists of
several government hospitals in Sri Lanka, on the recommendations of the signatory
organisations.

Commenting on CICT’s continuing support to this eye care programme, the
Company’s General Manager – Administration and Corporate Social Responsibility Grant
Yang said: “The C-Blue Restore Sight Project was launched to enable access to
eye care, especially for those living in impoverished conditions. The recent
economic crisis in Sri Lanka
has pushed many more beyond the poverty line, and often, non-emergency healthcare
is one of the casualties on the list of priorities. With this latest phase of
the project, CICT is reaffirming its  commitment
to the continuity of this initiative, despite the challenges faced by the
business.”

Cataract surgeries, refractive surgeries that
reshape the cornea (LASIK surgery), and Corneal Collagen Crosslinking (CXL)
including squint correction and keratoplasty will be performed under this phase
of the CICT ‘C-Blue Restore Sight Project.’ Additionally, selected patients requiring the
Avastin injection for visual defects too will be accommodated. Plans to conduct
eye camps in certain needy areas identified by CICT are also in the pipeline.

At a ceremony held recently at the Hospital, Grant
Yang presented a symbolic cheque to the Chairman and CEO of Nawaloka Hospitals
Dr Jayantha Dharmadasa and the Hospital’s Director/General Manager Vidya Jyothi
Emeritus Professor Lal G. Chandrasena. Thereafter, the CICT team visited some
of the patients scheduled for surgeries.

Since the launch of the ‘C-Blue Restore Sight Project’ in 2015, CICT  has funded more than 450 cataract surgeries
to restore sight, in collaboration with the National Eye Hospital.

A generous contributor to community welfare, CICT is also the
principal sponsor of Sri Lanka’s Wheelchair Tennis Programme and has
donated over Rs 54 million for the cause over the past seven years. Additionally,
CICT and the China Merchants
Foundation (CMF) which is the social responsibility arm of CICT’s parent
company, China Merchants Group (CMG) have constructed
and donated a well-equipped, two-storey Community Centre Building to the
Pannila Village in Horana with an investment of US$ 102,000 under their ‘Hope
Village’ project, and are also supporting another ‘Hope Village’ in
Lunugamvehera in the Hambantota District.

CICT manages the South Terminal of the Port
of Colombo, the first and only
operating deep-water terminal in South Asia,
which is equipped with facilities to handle the largest vessels afloat. Since
its inception in 2014, the terminal has incrementally grown the volume it has
handled; from 686,639 teus in 2014, to just over 3.2 million teus in 2021.

CICT is the flagship overseas terminal of China Merchants Port
Holdings Company Limited (CMPort). CMPort is the largest and a
globally-competitive public port developer, investor and operator in China with investments in Mainland China, Hong
Kong and overseas. CMPort has a port network portfolio spanning 50 ports in 26
countries and regions. Guided by the vision “To be a world class
comprehensive port service provider” and supported by its domestic, overseas
and innovation strategies, CMPort strives to strengthen its core competencies
in global throughput, port service and management.